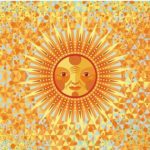 🌞WHAT IS THE SUMMER SOLSTICE?🌞

🌻 In the Northern Hemisphere, the June solstice occurs when the Sun reaches both its highest and northernmost points in the sky.

🌝 The word “solstice” comes from Latin solstitium—from sol (Sun) and stitium (standing), reflecting the fact that on the solstice, the Sun appears to stop moving in the sky as it reaches its northern- or southernmost point.

🌻 The solstice, the Sun appears to reverse course and head back in the opposite direction

🌝 Now is the time to plant the seeds of your intentions for the next cycle!

The Goddess Awakening & Healing Sanctuary, LLC inspires, educates, and empowers melanated women to be their most authentic and healthy selves by tapping into the Goddess within.

DISCLAIMER:  The content and material on this site is for informational and educational purposes only. It’s not a substitute for professional medical advice, treatment or diagnosis. Please consult your health care provider before starting a new program or treatment.